Mostar is the administrative centre of Herzegovina and its largest town. Due to its mild and favourable climate, with over 230 sunny days a year, and its wealth of historical heritage Mostar is considered a pleasant place to live and a delightful place to visit. Today's Mostar has two distinctive parts - the ancient, Old Town which dates from the early 16th century and the modern one from the 1950s; regardless of which route you take into town, you'll see the blend of cultures and civilizations. For example, in a radius of one hundred metres you can see a mosque, a Roman Catholic church and the spot of the new Mostar synagogue. The new asphalt road leads to cobblestone roads and a dive headlong into the beauty of Mostar.

Once you enter the centre and pass the busiest streets, you will see why Mostar is known as one of the most interesting destinations in this part of Europe. Whether you are on your way as a pilgrim to Medugorje or visiting the Dervish House in Blagaj, Mostar should be a part of your journey; it is less than an hour's drive from the Adriatic coast and just over 2 hours drive from the country's capital, Sarajevo. The town is open for tourists throughout the year and in the summer offers numerous attractive locations, the most famous of them being The Old Bridge, originally built in 1566, and fully reconstructed in 2004. The core of The Old Town, including the Bridge is proclaimed a protected UNESCO zone for its importance and beauty.

Places of interest nearby

Blagaj - a place visited for its beauty, fascinating nature and history. The unique atmosphere at the source of the river Buna provides a setting of peace for the Dervish House, one of the most mystical places in Bosnia and Herzegovina The town of Blagaj and its surroundings are characterised by the diversity of surface waters, groundwater, karst formations and rocks. The water springs out from underneath a 200 meter high vertical cliff at the top of which lie the ruins of the old town of Herzog Stjepan.

Počitelj - In the valley of Neretva, Počitelj was the main defence against the Ottomans; the fortress was built by King Tvrtko in 1383 and it had a strategic role in controlling the passage to the sea through the Neretva valley.

The Speleological Nature Park at Ravno - just 12 kilometres from the Adriatic coast, encompassing the fertile Plain of Popovo and the largest sinking river in the world (96 km). The Trebišnjica River flows through the famous Vjetrenica Cave which provides an unforgettable experience for tourists.

Stolac - situated in the south-eastern part of Bosnia and Herzegovina on the Bregava river surrounded by Mount Hrgud and the Plain of Vidovo. The western access into Stolac is the Dubravska Plateau, particularly known for peach growing and, above all, Dubrave vineyards and the famous wines from Stolac. This area has been attracting people since prehistoric times, all of whom have left their mark in this area with hillforts, tombstones and other stone tablets; in fact it belongs to a small group of places in the Balkans where material evidence of urban life has been preserved for over 3,500 years, dating back to the time of the last discovered remains of the Illyrian town, Daorson.

Neum - a town, a tourist resort and Bosnia & Herzegovina's only municipal centre on the Adriatic coast.  A Mediterranean climate with plenty of sunny days , fresh sea air, coastal walks, night time entertainment and water sports will make a visit to Neum a memorable experience. The authentic Herzegovinian cuisine complemented with different seafood make up a rich gastronomic offer at its hotels and restaurants, whereas the hinterland of Neurn has plenty of olive plantations and vineyards, an ideal place for agro-tourism.

Medjugorje - a Marian shrine and a world-famous pilgrimage site, often times compared to Lourdes and Fatima. The Blessed Virgin Mary appeared to six children for the first time on June 24, 1981. According to the unanimous testimony of the seers, Virgin Mary conveys through them to all believers messages of peace, love, faith, fasting, prayer and promises. Each pilgrim visits the parochial Church of St. Jacob, located in the centre of town, the Hill of Apparition in Bijakovići – the place where the Blessed Virgin Mary appeared for the first time - the Hill of the Cross, where a huge cross was erected in 1993, and as St. Francis’ Garden.

Jablanica - located under the mountains Čvrsnica and Prenj on the river Neretva which flows through the centre of the town. The calm waters of Lake Jablanica offer water sports, whereas kayaking and rafting can be enjoyed in the Neretva canyon, the mountains are ideal for hiking, while Risovac, located within the Nature Park Blidinje, is perfect for winter tourism.

Konjic - a lovely little town with the Neretva River running through the centre. The not-to-be-missed attraction is certainly the Kamena cuprija (Stone Bridge) built in 1682.

Čitluk - the karst plateau of Brotnjo is the winegrowing and winemaking cradle of Bosnia and Herzegovina; almost every family has its own vineyard and produces its own wines. In fact the "Wine Route Herzegovina" with its slogan “with wine through time” has opened the door to anyone who admires wine and the traditional way of life.

A selection of relatively easy, guided hikes from Mostar in stunning countryside.

The 4* Hotel Villa Eden & Spa is located just 500m from the well-known Stari Most (Old Bridge), the Old Bazaar and the Muslibegović House in central Mostar.

The Hotel Kriva Cuprija sits in the heart of Mostar's UNESCO Zone; its terrace affords beautiful views of the Old Bridge, town and Neretva river.

Hotel Hana is just a short walk from Old Bridge and the bazaar offering a modern touch but on a small scale.

The Boutique Hotel Kapetanovina is located in the old town of Mostar, near the Old Bridge. 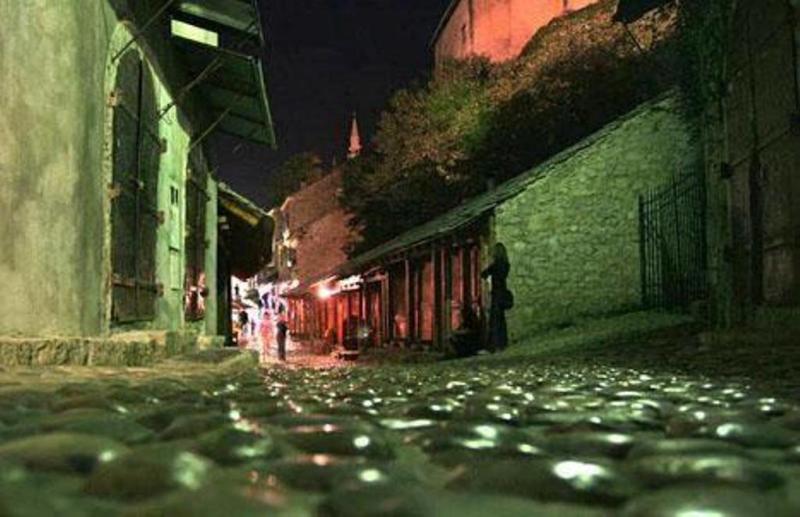 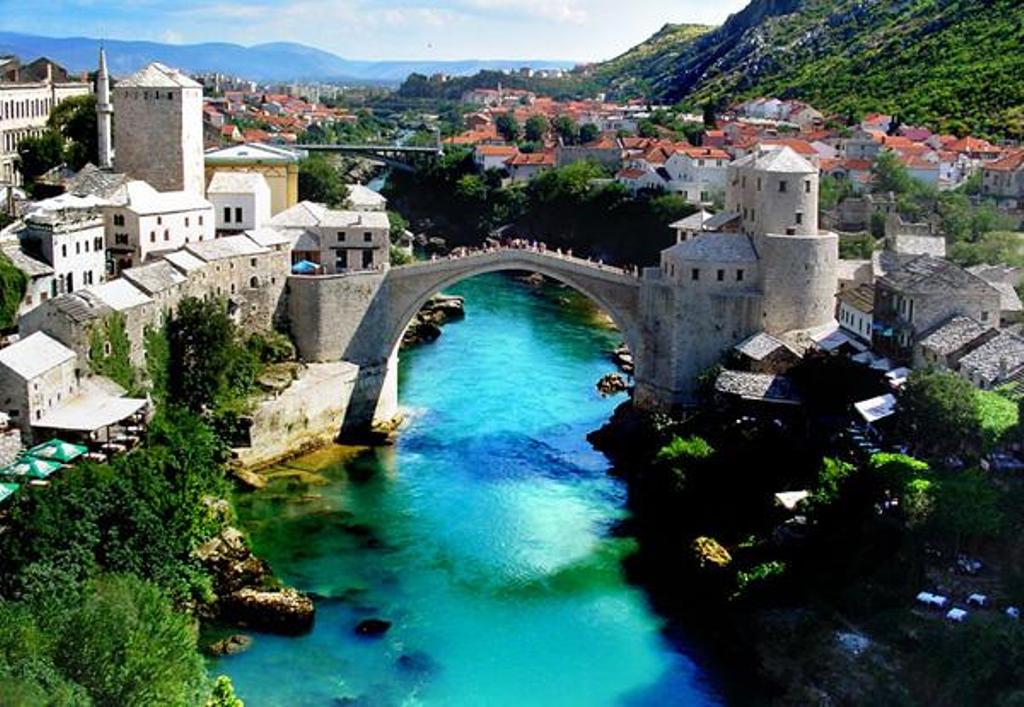 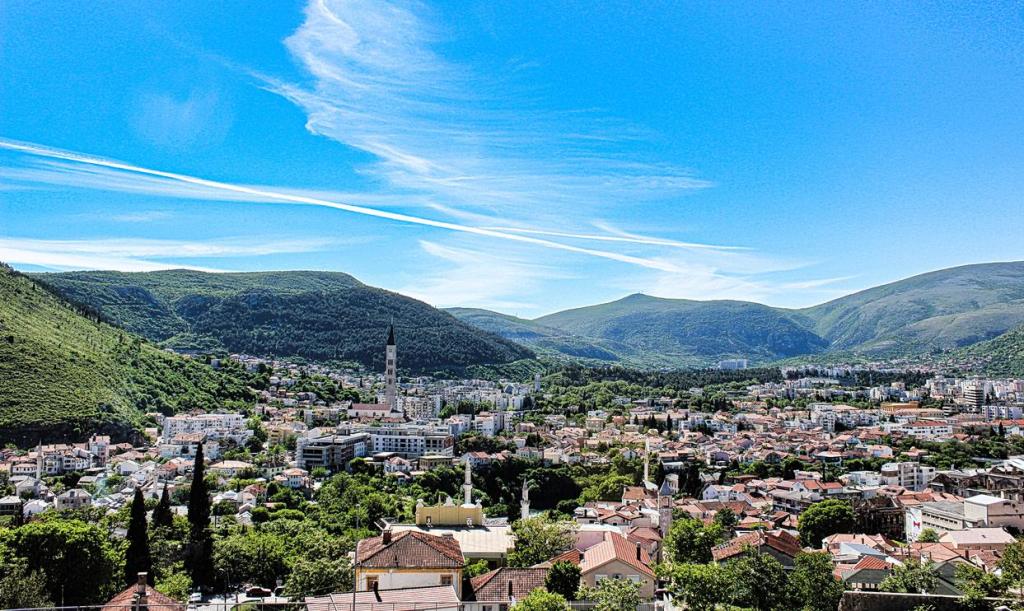 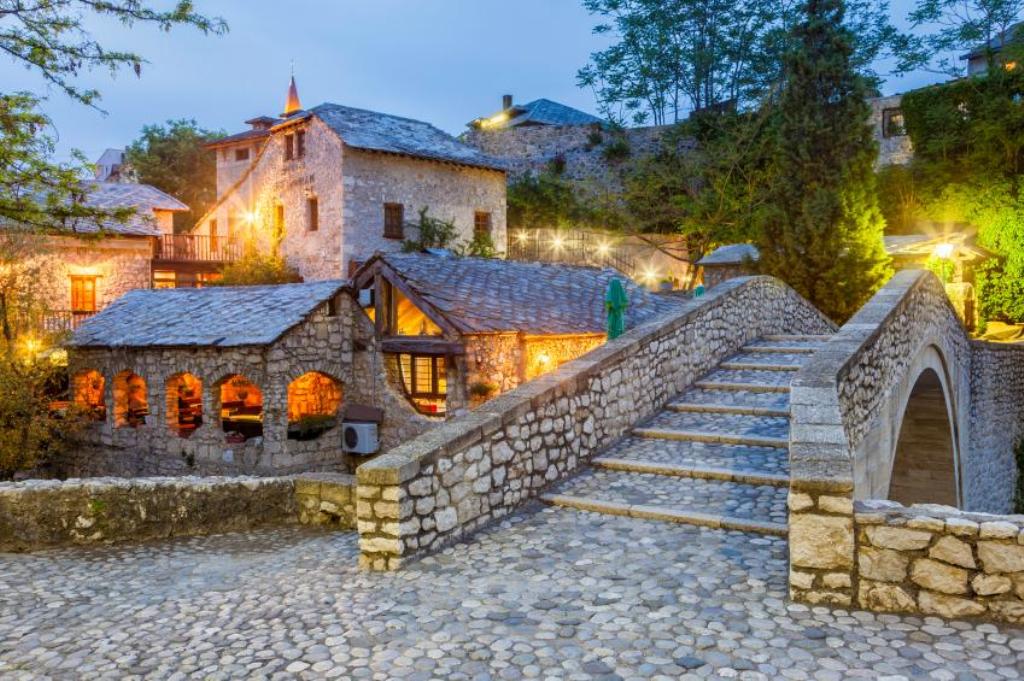 "I loved it, my wife not so keen. We had a double room under the main terrace accessed by steep stairs that felt like going down into a dungeon. The room looked out over a fast flowing stream which became a torrent during the night following a storm. The sound of the water, even through double glazing, was loud and woke us both up. For a few minutes we really thought we were going to be inundated. As the rooms at this level have only one set of stairs down to them and no secondary escape it was a ..."

"The visit to Plitvisc lakes and falls were absolutely spectacular. Driving on the open roads is simple and easy. Through the towns can a little more nerve raking. Having a couple of nights in each place helped keep the pace realistic. Be prepared for limited ability for laundry other than the hotel services. Having 3 nights in Trogir was a little more than needed and would have been better 3 nights based in or nearer to Split as this was where most sights were. Overall it was a very interesting experience ..."