Many hundreds of years after the destruction of Phaistos, Matala became the Roman harbour for the town of Gortys.

Today, a beautiful half-crescent shaped sandy beach is protected on both sides by towering cliffs. You'll find a number of caves carved into the limestone here; archaeological digs have determined that the area was occupied during the Stone Age and the caves were used as tombs by Romans and Christians.

In the 60's and the 70's Matala gained international attention as hippies came from around the world to live in these caves. Important celebrities visited such as Joni Mitchell, Bob Dylan, Janis Joplin, Joan Baez and Cat Stevens.

Nowadays tourism has seen the area develop, many visitors being attracted by the tamarisk-shaded beach.

About 2 kilometres from Matala lies the long, sandy beach of Kommos, where visitors will find only smaller hotels, pensions, tavernas and shops.

There is much to explore in the surrounding area. Apart from the second largest Minoan Palace of Phaistos, there is the Minoan Palace of Agia Triada, the famous ancient Roman capital of Gortys, the tiny village of Vori with its Ethnological Museum, the mountain villages of Kamares and Zaros with their countless natural springs, and much more.

This traditional, family-run hotel is situated on the outskirts of Matala in a very quiet setting, surrounded by beautiful landscaped gardens. 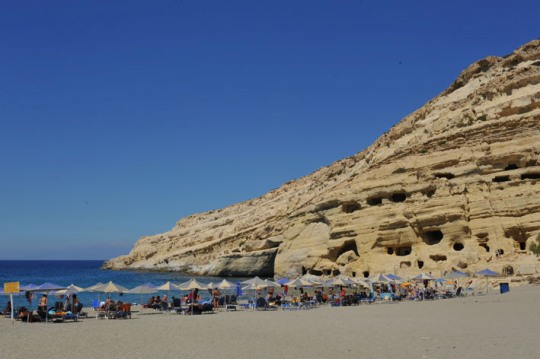 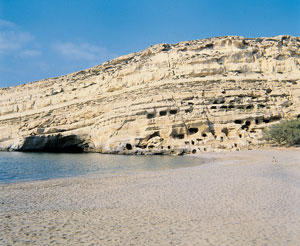