Trogir's maze of small streets rises out of the sea on its own little island (just 20m from the mainland). This magnificent, compact town, founded by the Greeks and built up by the Romans, Croats and Venetians is now a delightful car-free place with many bars and restaurants, dominated by the Cathedral. Opposite the Cathedral on the main square is the Cipiko Palace, a lavishly decorated 15th century mansion with triple-arched windows. Trogir is a unique cultural monument and was registered on the UNESCO list in 1997. The magnificent historical centre and the rich cultural heritage, which inspired travellers and travel writers throughout the centuries, offers visitors an unforgettable encounter of the past.

Trogir has a mild Mediterranean climate with 2700 sunshine hours per year and is a real treasure among tourist destinations in Croatia. Average air temperature throughout the year is above 15°C, reaching more than 30°C in summer. Tourism is the largest industry in the Trogir area but fishing and agriculture are still important.

NB. Split and Trogir are close to each other so we would suggest choosing one or the other as a base to explore on any self-drive or island-hopping itinerary. It is possible to use the frequent passenger ferry between the two locations to avoid driving.

The whole city of Trogir is a monument in itself but the most famous buildings are St. Barbara's Church (an early medieval church, dating to the XI century); St. Lawrence Cathedral (called St. John by the locals) - one of the most valuable monuments on the eastern coast of the Adriatic and the Kamerlengo Fortress (built in Venetian times) which is a most beautiful stage hosting music evenings, concerts, festivals and a variety of plays.

There are so many interesting features and stories told in the silence of the narrow streets of the old town; the city gate has the iron spikes that once defended their citizens from enemies attacking the town and those who did not follow the laws in the 13th century were put on the pillory. Nearby the old fish market was once used as accommodation for those who did not arrive at the town before the city gate was closed.

Trogir and its surroundings enjoy a favourable climate with a good choice of activities, beaches and lively nightlife in its clubs and numerous coffee bars. From Trogir you can take excursions to the site of Roman Salona, Sibenik and Krka National Park (near Skradin). It is easiest to visit Split by using the local ferry direct from Trogir’s own harbour across the bay to the main promenade in Split (just metres away from Diocletian’s Palace). Activities available include cycling, paddle boarding, sea kayaking and snorkelling; nearby we can also offer river rafting and zip-wire adventures.

The Island of Ciovo

Ciovo Island is connected to Trogir by a bridge (Trogir is in effect a "stepping stone" to Ciovo from the mainland). There are numerous little churches scattered all over the island with  remarkable treasures, for example, the church dedicated to the Holy Virgin by the sea in a peaceful oasis of pine trees; the Franciscan monastery of Saint Anthony and the Dominican monastery of Saint Cross in the vicinity of the Hotel Sveti Kriz.The island is lush with olive groves, vineyards and Mediterranean vegetation and offers many places to explore on foot, by bicycle and in the car as well as for swimming and diving.

The nearby Drvenik Islands (Drvenik Veli & Mali) are also worthy of consideration but will require a ferry or excursion boat ride to reach. The coastline is full of sunny, sandy beaches and on the east side of the island is the beautiful Blue Lagoon.

The only hotel which is actually situated on the Promenade (Riva) of Trogir, between the Kamerlengo Fortress and the 13th C. convent of St. Dominic. Great value in a great location.

The Fontana Hotel enjoys a central location in the old part of Trogir. This pleasant hotel represents good value for money.

The Hotel Sveti Križ is surrounded by a pine forest on the north side of the island of Ciovo, overlooking the sea and Sveti Križ Church.

A family-run hotel situated on Ciovo Island, a short walk across the bridge to the UNESCO-listed town of Trogir. A good quality hotel with its own parking.

Set in an 18th-century Baroque palace in the historic centre of Trogir the hotel lies a stone's throw from the Piazza and the famous St. Lawrence Cathedral.

A high quality boutique hotel in the heart of Trogir. 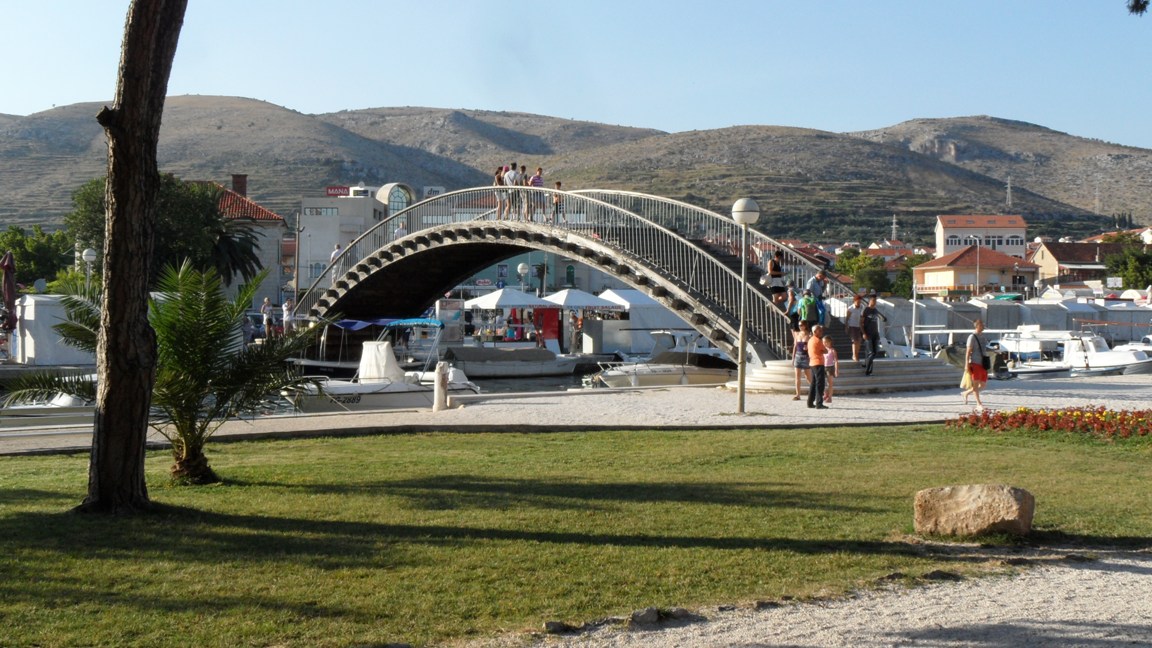 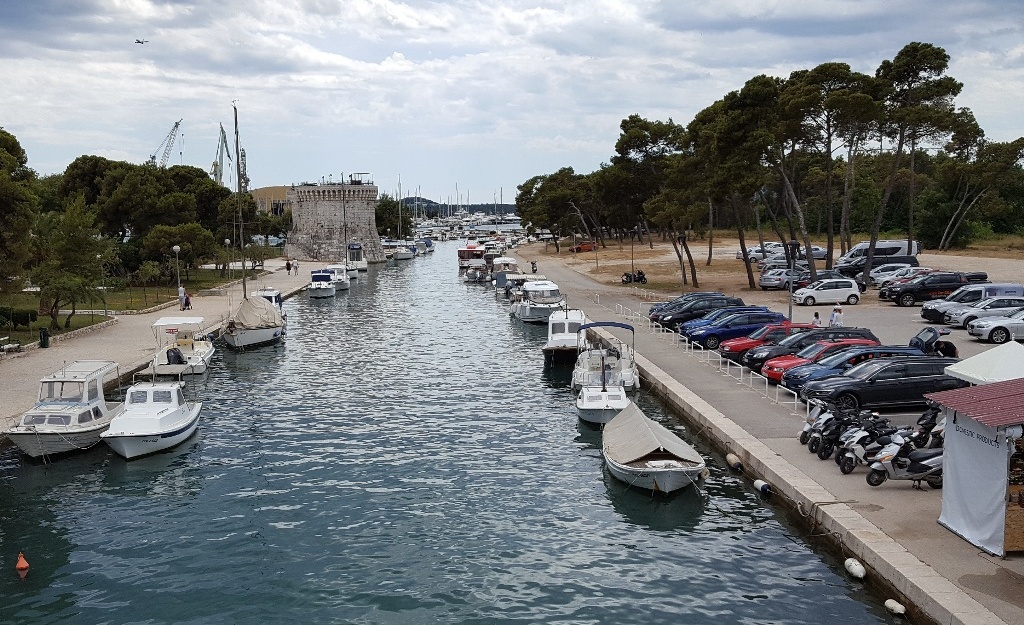 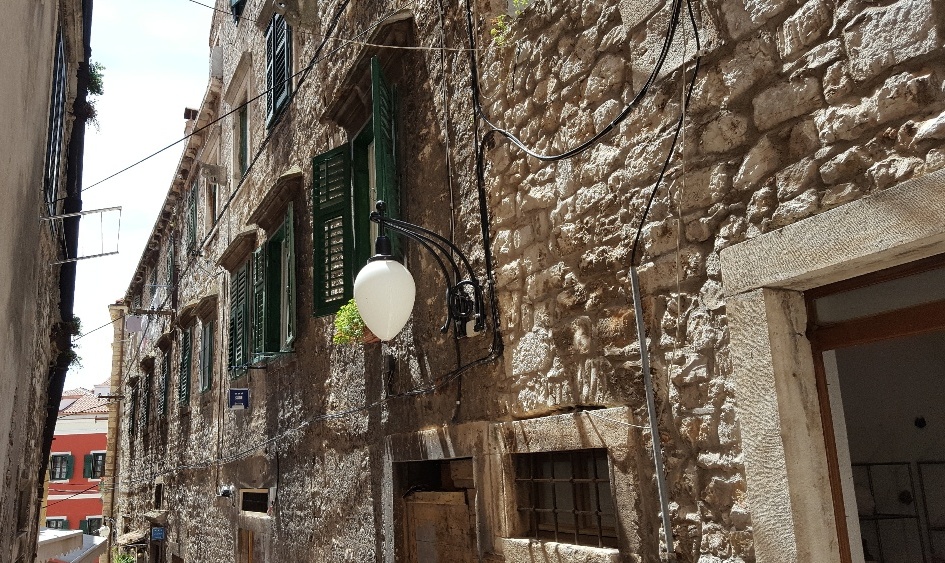 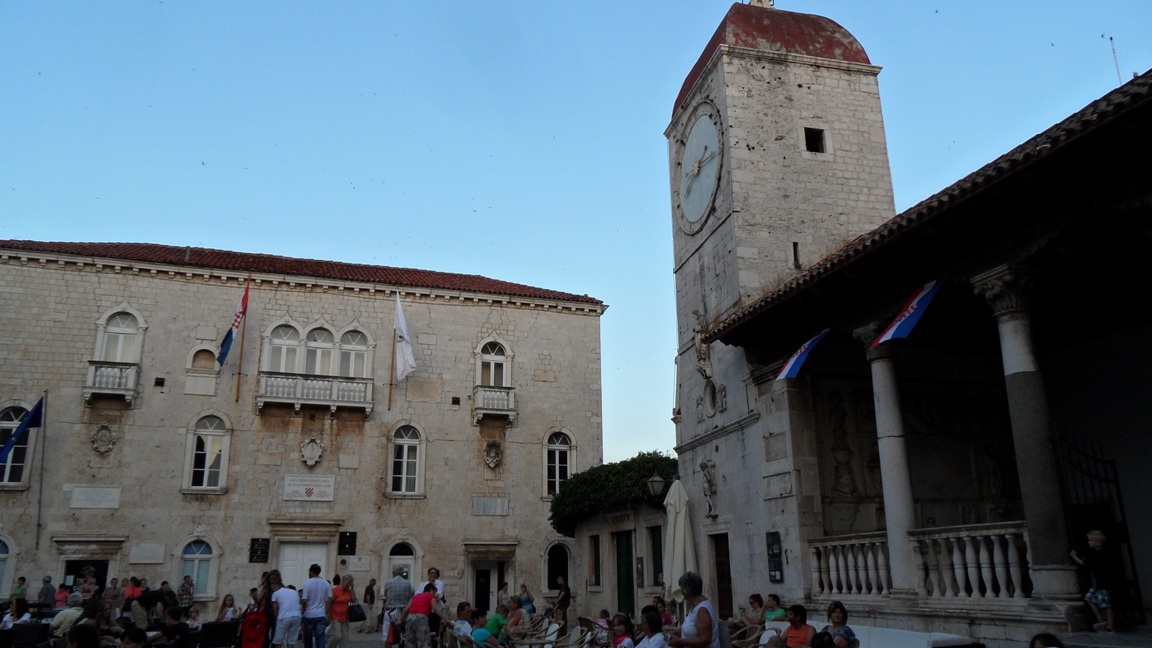 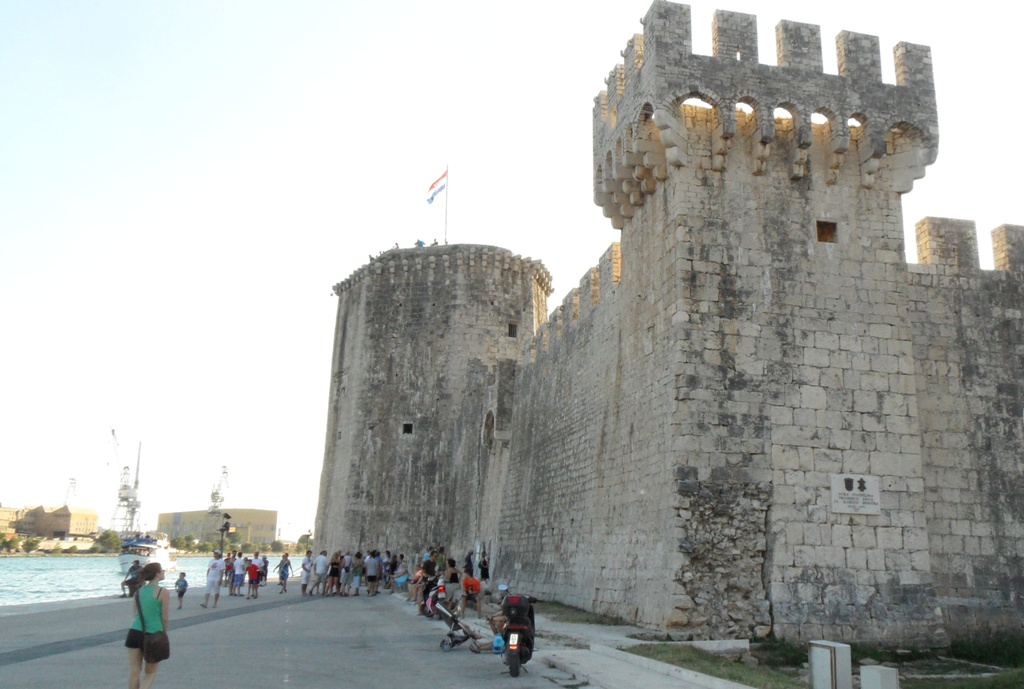 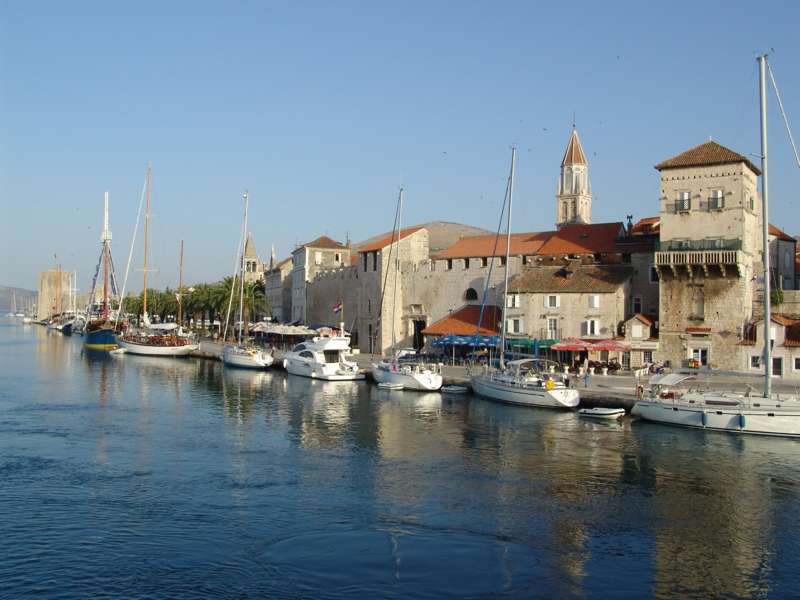 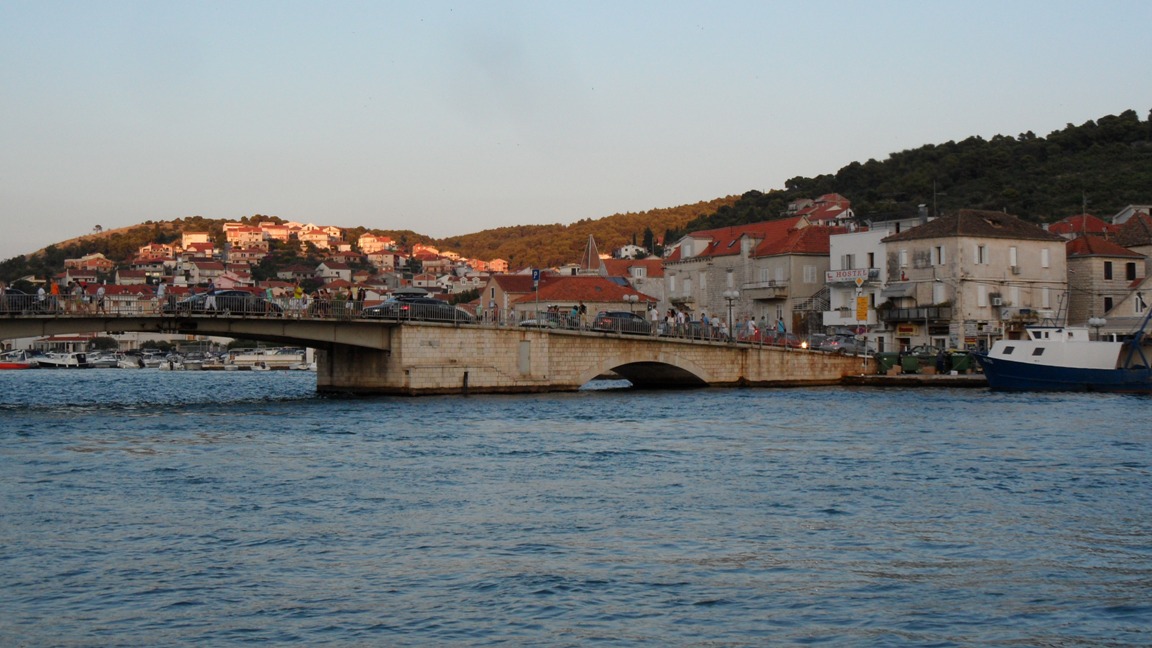 "breakfast left a bit to be desired, but good location and nice room"

"We didn’t bother to try and drive to the hotel; we just parked in the public car park as suggested and walked to the hotel. We found our room comfortable if a bit bare. No fridge, no room safe, no kettle - with these it would have full marks. The breakfasts were excellent with omelettes cooked to order and both days we ate on the terrace outside overlooking the seafront. Staff were friendly and helpful but also run the terrace café, so busy! The stairs were steep and narrow but manageable. ..."

"Trogir Palace Hotel. Superb location, excellent cleanliness, staff somewhat aloof/disinterested unlike all the other hotels where staff were very friendly and helpful. Food alright but an extra charge asked for decaffeinated coffee with breakfast - not impressed!!"

"At the Hotel Concordia in Trogir we were right in the old city, by the water and within walking distance of all the local sites and excellent restaurants. "

"The Vila Sikka was very smart inside and again very friendly. The breakfast was excellent."

"Hotels and itinerary were great. We did however waste an entire day travelling from Trogir to Omis as we took the coast road which moved at a snails pace - I would advise future travellers to take the motorway. We were advised that it was fine to turn up an hour before departure for a ferry. This is not the case at Makarska - we arrived over 2 hours before departure and did not get on, meaning waiting for the next ferry which was not for another 6 hours. Those travel hiccups aside we did have a great ..."

"We are back home and suffering from post holiday withdrawal, we have thousands of photos to sort through and just as many wonderful memories. I thought while it is all still fresh that I would drop you a line to say thanks.   The whole trip was amazing and everything worked without a single hitch. The hotels that you booked for us were spot on and the car hire etc all worked perfectly. Really the holiday could not have been easier so a massive thank you for all your advice and organising.   The ..."

"Excellently located on the quieter end of the promenade with tables/chairs/sunshades outside for breakfast etc looking onto the sea/boats. Comfortable with friendly & helpful staff. No lift & 4 flights of stairs to go up to our room but staff carried our cases, thank goodness. No car park but an arrangement with the city for discounted day rate car parking Just outside the old city, about 10 minutes walk to the hotel. A good choice."