Meknes was made the capital of Morocco in the 17th century by Sultan Moulay Ismail, known as the Louis XIV of Morocco; in this respect Meknes can be compared to Versailles for its grandiose and extravagant monuments. The maouseleum of Moulay Ismail is open for non-muslims to view but not to enter. The city walls are extensive and enclose a less fearsome medina than at Fez. A highlight of the sights here is the Dar Jamai, a 19th century palace now serving as a museum of Moroccan arts. With its medina and markets, Meknes combines the attractions of an historic town with those of a picturesque city.

Meknes is an engaging Imperial City which is a delight to visit and despite the wealth of its historic heritage it has retained the simplicity of its origins. Once the Alaouite sultan Moulay Ismaël decided to make Meknes one of the most beautiful and powerful Imperial Cities in Morocco he protected it by building almost 40 kilometres of walls. It has preserved many imposing monuments, including numerous mosques which earn it its nickname of the "city of a hundred minarets"; among them, the Great Mosque, probably founded in the 12th century, is remarkable for its gates with beautiful sculpted canopies. Its medina and the remains of the royal palace earned Meknès a place on UNESCO's World Heritage list. A tour round its ramparts reveals its full beauty; some borjs (small forts) also provide a panoramic view. The city is still prosperous, benefiting from the harvests of the fertile Saïs plains (grain, olives and grapes).

Considered to be one of the most beautiful gates in the world, Bab Mansour was constructed at the beginning of the 18th century and it is the entrance to the Imperial City proper. Meknes has one of the busiest medinas in Morocco; the Place El-Hedime, located exactly between the old town and the Imperial part of the city, houses the covered markets and becomes busy at dusk: fire-swallowers, storytellers, animal trainers and jugglers create an atmosphere different from anything you are used to.

The regional ethnographic museum, which has its home in the Dar Jamaï palace, is arranged seamlessly around a superb Andalusian garden. The picturesque souks offer all local crafts, from fabrics to numerous rugs; near the Great Mosque, the Bou Inania Medersa, an Hispano-Moorish masterpiece which no longer receives students, is open to visitors. The Nejjarine mosque is one of numerous mosques in the "city of a hundred minarets" and the El Mansour palace, a luxurious 19th century bourgeois mansion transformed into a bazaar, is also worth a visit. The Agdal pond, an immense rectangular basin of water, irrigated the harem and gardens; look across to Dar El-Ma, the palace of water which housed Imperial cisterns and served as a storage area for supplies in case of siege - at the time, the 7 metre thick adobe walls and a clever system of canals ensured constant coolness. Don't miss visiting the Qara prison in Meknes; the arresting atmosphere which rules in the immense low-vaulted rooms of these vast underground holding rooms is particularly eerie.

Towards the end of the summer, don't miss one of the most famous events in the Kingdom, the Tissa horse moussem. This "fantasia" assembles Berber horsemen from the region to the sound of drums, gunfire, rhythmic songs and traditional dances. Meknes is also the home of the largest stud farm in North Africa with 200 acres and 450 horses. In the 17th century, Moulay Ismaïl, who lies in a finely wrought mausoleum which is open to the public, also had enormous stables built.

The sacred town of Moulay Idriss lies 22km north east of Meknes - Moulay Idriss converted the local Berber people to Islam before founding Fez. The town of Moulay Idriss comprises stunning white houses arranged around the mausoleum and is still a spiritual centre, an unspoilt place with timeless charm. The largest Roman archaeological site in Morocco lies 31km north of Meknès: Volubilis. You'll see the Triumphal Arch, capitol building, house of Bacchus – everything testifies to the city's splendour and its economic and political weight. You'll need to allow at least two hours to discover this open-air treasure.

The tastefully-furnished Riad Idrissi has only 12 rooms and is decorated in a Moroccan style. A panoramic terrace offers a magnificent view of the mountains and medina. 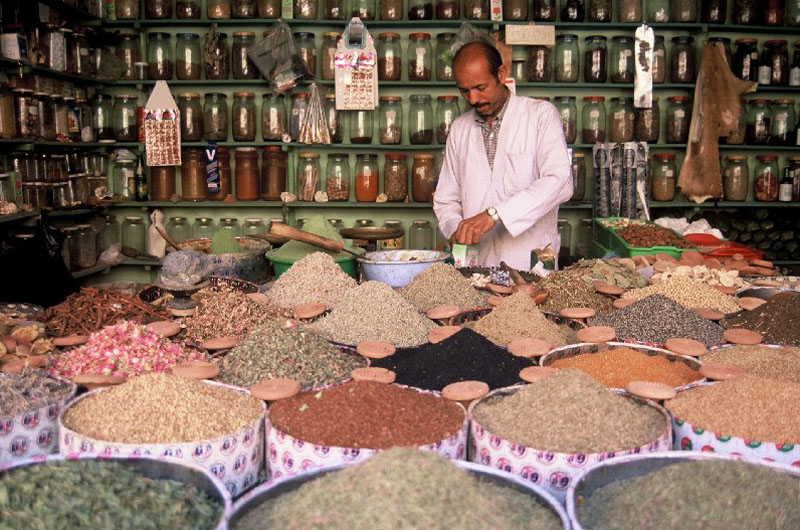