Istria is the most northerly province of Croatia with a great sweep of coastline jutting out into the Adriatic. Referred to by some as the "Little Tuscany surrounded by the sea" this alludes to both its landscape and the historic Italian influence on the people and places of Istria. The hillside villages, such as Motovun, its vineyards and agriculture in general will certainly trick your senses at times into believing you are indeed in Tuscany.

The scenery is simply stunning, the coastline, mediaeval villages, hills and history are all superb, a fabulous mix for a great holiday destination. Most noteworthy is the magnificent Roman amphitheatre in Pula (third largest in the world after Rome and Verona).

Featuring a personal selection of fantastic small and boutique hotels in the region we offer our extensive knowledge and experience to plan fly-drive and other tailor-made holidays in Istria. These include the historic towns of Pula, Rovinj, Porec, Rabac and Novigrad (Opatija, although actually part of the Kvarner region, is also included here). In addition we highly recommend the stunning hill town of Motovun, a beautiful place to relax, do some walking and enjoy some truly excellent food, including its famous truffles.

Pula is located on the southern tip of the Istrian Peninsula and has been an important port for at least 3000 years. Its Roman amphitheatre is the biggest outside Italy, in fact it is still a great venue for concerts featuring international artists. Pula is also host to a film festival in early August each year. Other sights in Pula include the Arch of Segius, the Forum and the Temple of Augustus.

The old town of Rovinj with its narrow streets and hilltop Cathedral of St Euphemia is very typical of Istria. The colourful facades such as those of the City Palace and Town Clock are visible from the sea and the large harbour, packed with waterside restaurants, conceals a wonderful array of shops, galleries and cafes. Facing west the town's cafes and bars are famous for views of the sunset over the Adriatic and are an excellent place to treat yourself to a meal of freshly caught fish.

Motovun is an ancient Istrian acropolis town situated on the top of a 277m hill whose current appearance originates from the Middle Ages. The longest Istrian stairway with 1052 stairs leads to the top of the Motovun hill and its Venetian town square. From such a rich heritage Motovun has so many sights such as the Renaissance Palace, the City Lodge and the Parish Church of St. Stjepan all of which are surrounded by the medieval arrangement of the streets with emblems on the front of buildings. The position and landscape of Motovun make it one of the most beautiful older cities on the Mediterranean.

Opatija is an elegant tourist destination, the centre of the Riviera with the longest tourism tradition in Croatia. Its advantageous location, flourishing vegetation and pleasant climate are the reasons for the beginnings and boom of tourism at the end of the 19th century. Built mostly at the turn of the 20th century, Opatija has preserved a discreet harmony with nature through to the present day. Its parks, illuminated seawall promenade (the 12km Lungomare), exquisite beaches and beautiful fountains are a picture frame for Opatija's numerous villas and hotels.

Porec is almost two thousand years old and is a seaport protected by the islet of St. Nicholas. Today, it is surrounded by large hotel complexes taking advantage of its less intense Mediterranean micro-climate but its historic centre is worthy of exploration and is easy to wander around on foot where you will see much evidence of Roman, Byzantine and Venetian architecture. The landscape has rich Mediterranean vegetation, with pine forests. The fertile red soil is ideal for the production of organic foods, olives, grapes and quality wine varieties such as Malvasia, Gamay, Merlot, Pinot, and Teran, an important part of Porec economy.

The tourist town of Novigrad is situated on the west coast of the Istrian peninsula at the western gateway to Croatia; it is reputed to have the warmest sea temperature and offers visitors a rich monumental heritage. Over the years the small town of Novigrad, which used to be a quiet fishing village, has become an attractive destination for tourists from all over but has preserved its irresistible charm offering a distinctive, almost intimate, atmosphere typical of small Mediterranean towns. The town’s fortifications dating back to the 13th century are the most precious jewel from the rich treasury of Novigrad’s historical heritage, in fact the town walls have preserved the rich history of the town, its valuable cultural heritage, traditions and culture, its rich gastronomy, as well as the kindness and hospitality of its people.

Rabac in the middle of the east coast is in a beautiful bay well known for its numerous restaurants and its nearby small resort villages of Duga Luka and Ravni. The old town of Labin is just inland with its Venetian palaces, churches and high fortress offering views back down to Rabac and the coastline for many miles is a delightful place to visit on any tour of Istria.

Lovran, once the winter holiday resort of Austrian nobility, is a small medieval town on the eastern coast of the Istrian Peninsula, just southwest of Opatija. Lovran is fringed by luxuriant gardens, pine, chestnut and cherry groves and sits below the Ucka Mountain and Nature Park. Linked to Opatija by the famous "Lungomare" coastal path, Lovran is a relaxing place which offers the visitor excellent fish cuisine and other local specialities in some fine restaurants and old taverns. A particular favourite of the area is the Chestnut (try the sweet cake, Maruni).

A few other places to visit during your holiday to Istria:

Pazin - a town in the heart of Istria. Jules Verne wrote about its most valuable monuments, the thousand-year-old Kaštel and the Pazin pit, in his novel “Mathias Sandorf”. Today the castle houses a musuem and you can fly across the "pit" on a zip line.

Buzet - approximately twenty kilometres north-east of Motovun and known as the “City of Truffles”. Some great local products made from truffles, mushrooms, olives and honey are fabulous reminders of the high quality cuisine of the area to take home.

Roc - approximately 10 kilometres from Buzet, this town has well-preserved walls, the oldest cannon in Istria and a Venetian bomber from the 15th century. The town is an important, historical centre of Glagolism and between here and Hum is the Avenue of Glagolitic priests made of 10 monuments set there between 1977 and 1981 as a tribute.

Hum - is a small mediaeval town located on a stretched out hill which dominates the landscape. The town has walls, a lodge and a parish church; it is also called the smallest town in the world.

Lim Bay - a protected landscape and underwater reserve (since 1964). The Lim Bay (or channel) was created by the flooding of the limestone karst canyon and is one of the most beautiful landscapes of Istria. It is a geomorphologic phenomenon with cliffs rising up to 150 meters above sea level.

Brijuni National Park - the Brijuni Islands National Park, an ancient summer residence of many presidents, is today the home of exotic animals. Many boat trips are available from the small port of Fazana (about halfway between Pula and Rovinj).

Učka Nature Park - view the Istrian peninsula from 1400m above the sea. Explore the rich flora and fauna of this beautiful mountain region.

Islands of Kvarner - a tour to the neighbouring islands – Krk, Cres, Lošinj, Susak – will make your stay unforgettable. Susak, the island made of sand, offers some excellent wines. Krk, the largest island in the Adriatic Sea, hides one of the oldest memorials written in the old Glagolitic script. Cres is well known as a natural habitat of endemic species. The waters of Lošinj, the island with the most therapeutical climate, are home to Mediterranean dolphins.

Motovun is an ancient Istrian acropolis town situated on the top of a 277 metre hill whose current appearance originates from the Middle Ages.

An elegant tourist destination which lies between the stunning panorama of the Učka Mountains and the sea.

Poreč (Parenzo) is a town on the western coast of the Istrian peninsula; its major landmark is the 6th-century Euphrasian Basilica, designated a UNESCO World Heritage Site.

Pula is located on the southern tip of the Istrian Peninsula and has been settled for at least 3000 years. Its Roman amphitheatre is the biggest outside Italy.

Jules Verne is reported to have been inspired by the captivating beauty of Rovinj - who are we to argue?

A Selection of private guided food & drink experiences to pre-book in the Istria area.

The Villa Annette is situated on a protected slope overlooking the bay of Rabac with wonderful panoramic views over Kvarner bay to the islands of Cres, Lošinj and Unije beyond.

The comfortable family-run Hotel Cittar is located in the old town centre of Novigrad, near the medieval town walls & a few metres from the marina and beach. 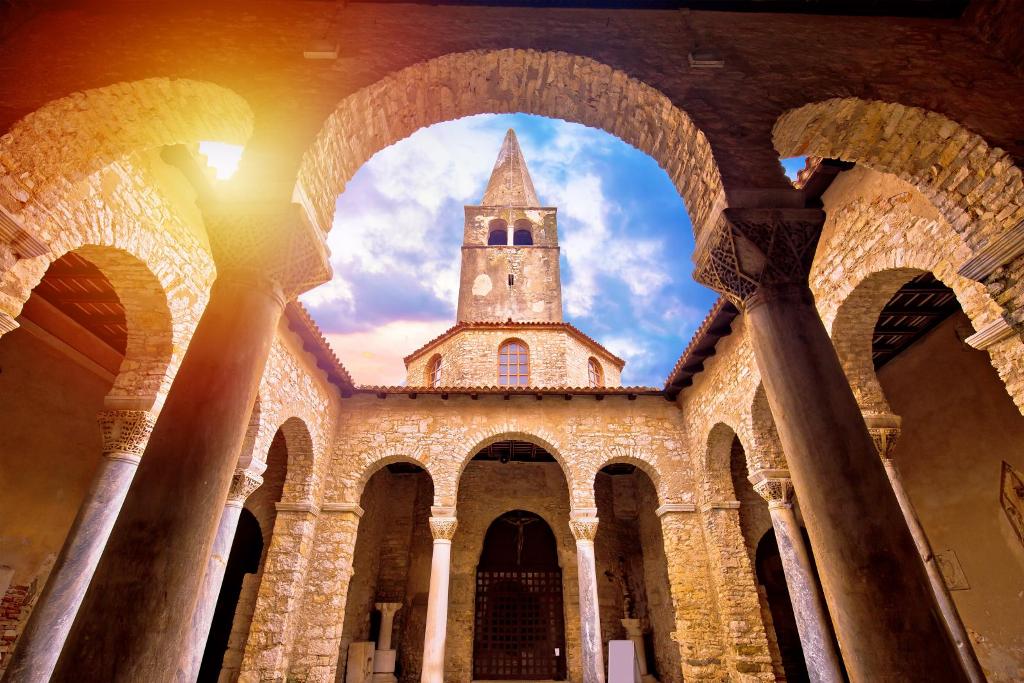 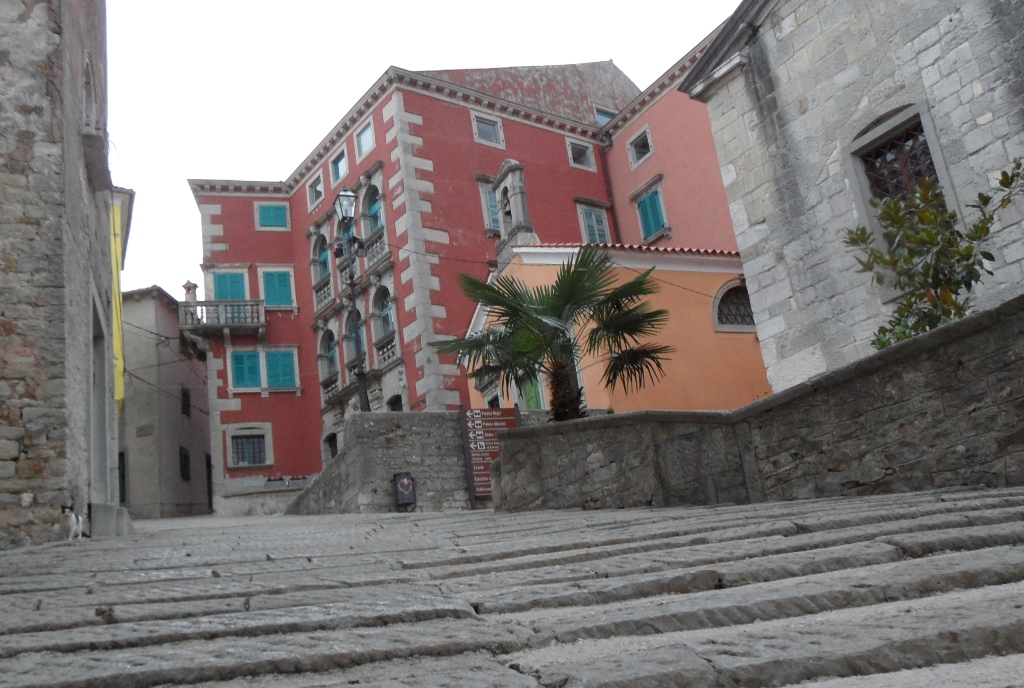 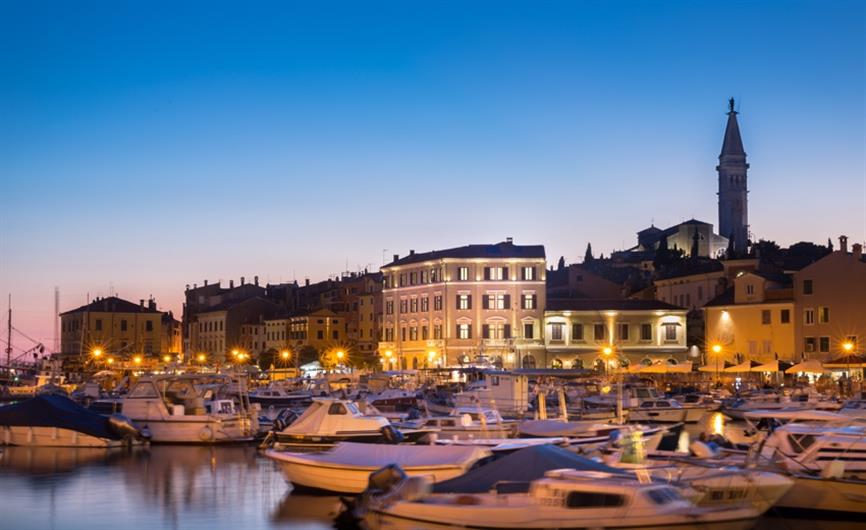 "We just wanted to thank you for a wonderful holiday, it was so interesting and different at each stop we had and also the trips in between. The hotels were all good and everything went very smoothly. We really enjoyed Istria and Slovenia was lovely."

"Absolutely loved our experience of Slovenia, scenery, people, food and wine. Having this sandwiched with a couple of resorts in Istria worked well, and the circular trip provided an excellent balance of beach, city break, lakes, mountains, treks and history. Thank you for helping us plan a memorable and enjoyable trip."

"Galeb Hotel - Opatija.  After a lovely drive through the countryside of Croatia, the rolling Tyrol style villages and pastures (we saw a lot of evidence of the war 20 years ago where many villages were still unoccupied or only just starting to come back to life - many derelict houses being slowly repaired) we saw the complete change in Coastline and much more like the Italian Riviera. Opatija was a nice town and our  hotel was very 'genteel', quite formal but we had a lovely room and enjoyed ..."

"Villa Oasiss, Medulin - This was a gorgeous hotel - really modern, beautiful room and bathroom and a great pool area. It was totally private and on the last day we had the pool to ourselves all day. We did have quite a bit of trouble finding it as we had been unable to download the map for this and couldn't get a signal so we drove to Medulin hoping to just stumble across it (most of the towns listed the hotels as you entered and pointed you in the general direction) but we couldn't find it anywhere. ..."

"Hotel Milan was very good: comfortable accommodation, very welcoming and friendly staff, and the food was excellent - the best of our whole stay, though much more expensive. The location was fine, half an hour walk into the city and 5 minutes from the beach."

"Amazing country, amazing holiday. Package helpfully and expertly put together by rediscover to meet my many requirements. Is always slightly challenging for us to find suitable accommodation as a father with two older teens, so I really appreciate the effort that was made to find us proper triple rooms in friendly family run hotels in amazing locations. If I had been a bit more sensible, we should probably have cut out the one night stays (2 nights in Dubrovnik rather than 3 would have been adequate), ..."